Tectonics: 19/09/2017 | 13:14:40 | 8.4°N, 98.72°E | -57 km.
Spatial Scale: Urban
Temporal Scale: ~36-95  seconds
Peak Ground Acceleration & Amplitude
Though it occurred exactly 32 years after the 1985 M8.1 subduction earthquake, the 2017 19S temblor was a M7.1 normal fault earthquake, with its epicenter 120 km away from Mexico City. Usually, as seismic waves move away from their origin and encounter friction, they decelerate. However, the mechanical properties of certain parts of the soil in Mexico City makes seismic waves accelerate again, significantly changing the way in which AO286 received tectonic forces.
Additionally, earthquakes are waves that do not just have force, measured in amplitude, but also frequencies: subduction earthquakes such as the M8.1 of 1985 register peak amplitudes at frequencies below 0.5 Hz, whereas normal fault seisms like the M.71 2017 earthquake register peak amplitudes higher than 1Hz . Depending on their height, structures are affected differentially by frequencies: higher frequencies with shorter periods exert more violence on structures with lower heights and viceversa.
The following graph compares two sites,  soft vs hard soil, and the earthquakes of 1985 vs 2017, revealing that these two variables, soil and building height, determine how an earthquake will affect different structures. AO286 was a seven storey building on soil Zone IIIa (explained in the Regulation section), which is the firmest of the soft soil zones. This data reveals AO286 was more vulnerable to an event like the 2017 earthquake than the 1985 temblor, even though the latter released 32 times as much energy. [11]

The graph reveals that structures on Zone IIId soft soil with a height of 7 to 10 stories were affected with +300 gal during the 2017 earthquake, which includes AO286. The following map shows where most collapses occurred during the 19S Earthquake and where the seism had its Peak Ground Accelerations (PGA) for periods of 1 Hz, or 1 second.
Both conditions correlate, suggesting that structures most affected by the earthquake were resonant where soils had a natural fundamental periods of the same value, 1 second.  These conditions include AO286, whose position is pointed out, revealing that AO286's height and soil conditions resonated to make it among the most vulnerable structures to the 19S earthquake.
The interactions of tectonic forces with the soil are further explored in the Desiccation section of this platform. [12]

Peak Ground Accelerations shown for the seismic waves of 1Hz, revealing the soils that resonated with the same fundamental natural period, which coincides with AO286's position.

Desiccation: The 1997  Report & Adjacent Structure Collision
Spatial Scale: Architectural
Temporal Scale: 20 Years
On the 7th of March of 1997, the Secretary of Transport of Mexico City expressed interest in leasing space in AO286. To determine if the building was safe, it instructed the Direction of Public works to survey AO286, who reported on the 4th of April of 1997 that they performed an ocular inspection, found that the building had a ground level and six stories with a RC boxed foundation, and a superstructure formed of columns and lightened slabs with masonry walls on its adjacencies. It also states:
"Although during the inspection no damage to the structure was observed, it was detected that the building has a settlement towards the east of approximately 15cm which originates a slump of the building causing it to be in contact with the building marked with the number 284 in the same street of Álvaro Obregón; in these conditions there is a danger that both structures will collide in the event of an intense earthquake. Therefore, it is not recommended to rent the building of Alvaro Obregon 286."
This report describes the way AO286 detected, registered and expressed desiccation's forces, which commenced in 1521 and operated still until the day of its collapse. [13] 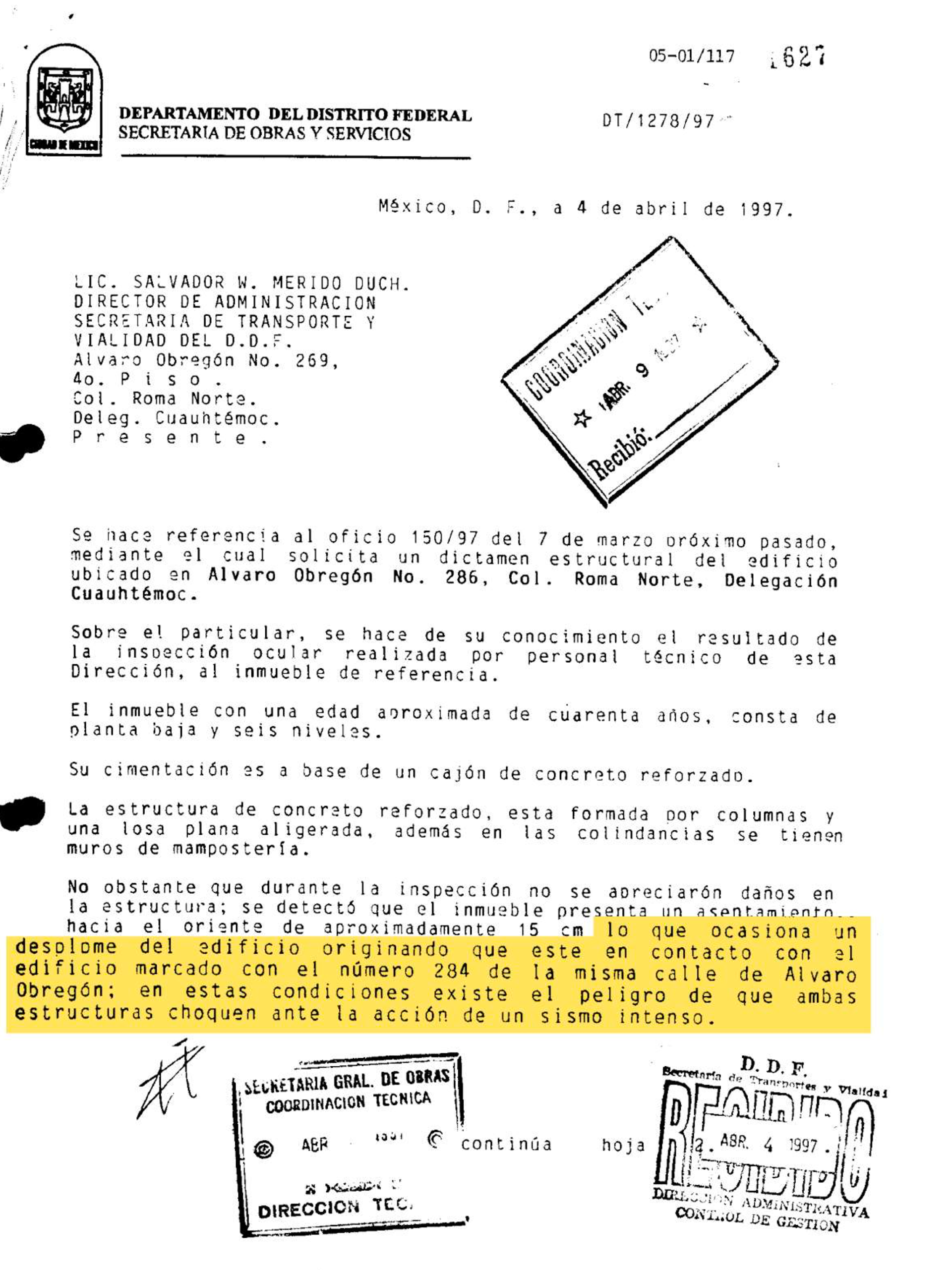 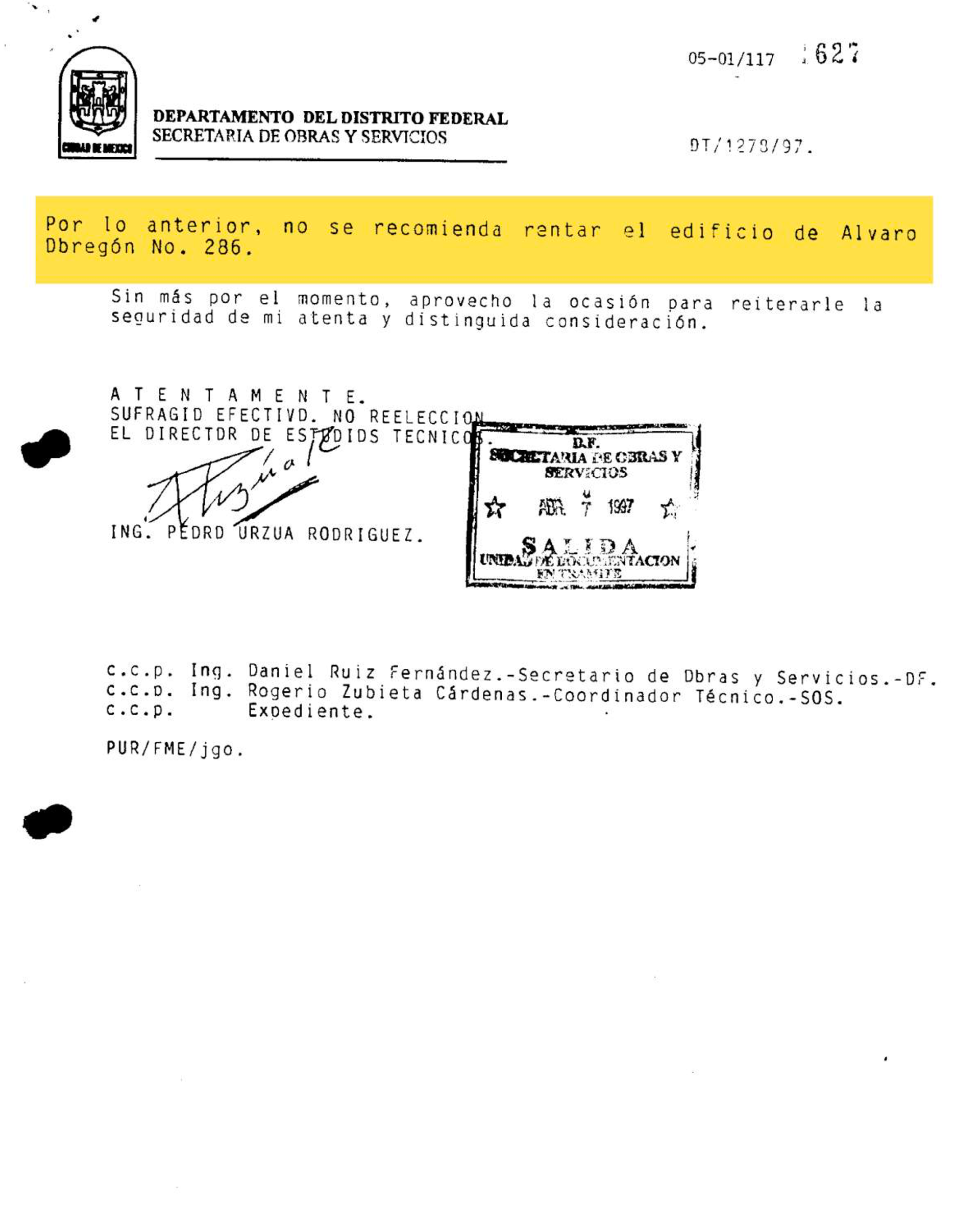 The 15cm slump of AO286 (shown in bright red), drawn to scale, causing a 0.36º loss of verticality. Based on available pictures, even such a slight change already would have reduced the separation between AO286 and its adjacency to become dangerous, increasing likelihood of collision during a seismic event.

Regulation: The  Accumulation of Irregularities of AO286
Spatial Scale: Architectural
Temporal Scale: Split Second
Considering the evolution of the MCBC, AO286 was built with the 1957 Emergency Building Code, yet the regulations for constructions were updated six times before it collapsed on the 19S earthquake of 2017. This final step reconstructs AO286 with available sources to highlight these irregularities and the point in time in which they became noncompliant with current codes.
BASIC INFORMATION ON AO286, MCBC 2016
- Soil Zonation: IIIa
- Building Classification: B1 Case 6, +3,000m2 and office use in Zone IIIa
- Maximum Storey Drift: 132 mm (H = 22.00 m. w/ error +/-0.50 m.)
- Minimum Adjacent Separation with AO284 (H = 12.00 m.) : 242 mm.
Based on the 2016 MCBC, valid when AO286 collapsed, a number of irregularities were identified, which are enlisted and shown in the following architectural plans, each coded with a number that is also shown on the drawings.
ARCHITECTURAL IRREGULARITIES OF AO286, MCBC 2016:
1) Change of Use: (Art. 184) AO286's construction and structural design in 1959 was approved for housing use, however, existing floor plans show it was used for offices, which require higher live load calculations. No evidence exists that the building was restructured to resist its change of use.
2) Adjacent Building Separation: (CTN for Seismic Design, 1.10) AO286's minimum separation with AO284 should have been 242 mm. Photos reveal the distance to have been shorter than 50mm, the minimum distance the MCBC demands. Additionally, the 1997 report states that both buildings were in contact with each other. (Art. 176) No evidence exists that the 1997 observation was ever corrected in AO286, a B1 subclass building.
3) Regional Subsidence: (Art. 178) At the time it collapsed, the effect of subsidence on AO286 had been observed for more than 20 years, however it was never reported to authorities.
4) The 6th Slab: (CTN for Seismic Design + Art. 184) No evidence exists that AO286's modifications to its 6th slab, which were detailed above, were endorsed by a Correspondent for Structural Safety.
5) The 7th Storey: (CTN for Seismic Design + Art. 184) No evidence exists that AO286's addition of a 7th storey, between 1994-1997, was endorsed by a Correspondent for Structural Safety.
6) Guard Rail: (CTN for Seismic Design + Art. 184) The pre-existence of a low-rise wall, characteristic of roof guard rails on RC structures such as AO286, is visible on photographs of 6th storey, further supporting the hypothesis that this was once the building's topmost level.
7) Raised Water Tanks: (CTN for Seismic Design + Art. 184 + Art. 143) No evidence exists that the addition of eleven water tanks on the 7th slab, increasing a punctual load of approximately 12.1 Ton., was calculated as part of the modifications to AO286. This creates an inverted pendulum effect, exacerbated during seismic events, which needs to be accounted for in any building's structural design and endorsed by a Correspondent for Structural Safety.
8) Covering of  Western Ventilation and Illumination Shaft: (CTN for Seismic Design + Art. 184) A video of the collapse and testimonies of rescuers state that the western ventilation and illumination shaft was restructured and covered in the first, second, and third storeys to create space for restrooms in the first and second storey. No evidence exists that this modification was endorsed by a Correspondent for Structural Safety.

Additionally, a number of document irregularities are identified, focusing on missing evidence of construction permissions, architectural drawings, among others:
DOCUMENT IRREGULARITIES OF AO286, MCBC 2016:
- Reporting of Damage: (Art. 178) No evidence exists that owners of AO286 reported to authorities the damage observed in the 1997 report.
- Evidence of Reparation or Rehabilitation: (Art. 231) No evidence was presented that AO286 or their owners corrected the observations of the 1997 report.
- Certificate of Safety: (Art. 71) AO286 had to comply with structural revisions every five years or after a major earthquake, such as the M8.1 which occurred twelve days before on 07/09/2017. No such certificates have been presented by AO286's owners.
- Safeguarding of Plans: (Art. 233) Owners of AO286 claim their copy of the plans were lost in the collapse. No other copies were found nor provided by the other parties mandated to safeguard them, either the local authorities (Delegación/Mayorship) nor the DRW.
CONCLUSION
Tectonics, desiccation, and regulation reveal the resonant collapse of AO286 as a form of seismic governance where the State with one hand mandates strict building regulations to counter temblors, while with the other hand progressively deteriorates the soil upon buildings are founded, all while failing to prosecute those who break the law, thus perpetuating environmental and institutional violence that leads to the death and destruction.
Revisit the forces again: